Following Richard's suggestions, I’ve decided to take a peek at Instagram to see how things are going in the “world” of the typewriter’s enthusiasts. It was with great pleasure and joy that I found that after all there are still plenty of us spread all around the world. I have discovered fantastic profiles with beautiful typewriters. And a lot of young folks… What proves that after all typewriters are not that obsolete! So I came to the conclusion that I can modernize myself a little bit maintaining the blog and also create an instagram profile so I can be able to follow those accounts. The novelties I’ll continue to post here first though! I’ll take this opportunity to republish some of the old photos that I had already posted here on the blog. So go over there and show me some love @machines_of_yesteryears!

Changing the subject, I went today to collect a new machine I bought online. Since I bought my Lettera 32 with Spanish keyboard, I was looking for a 22 with Portuguese keyboard. I had been hunting for a lime green with the round keys but never found one... Luckily I managed to find a silver one (I haven't ever seen one in this color – only in blue, green and taupe) in good conditions with a reasonably price tag and which has a fantastic history. When I've called the seller he told me that typewriter t belonged to his uncle who brought it from Angola when Portugal recognized the independence of its colonies overseas and people were forced to return. I think the typewriter was produced in South Africa, but I still have to confirm it and check the serial number. Could have been made in Barcelona and shipped to Africa. This weekend I’ll dedicate myself to that and I’ll take some pictures to post here. From what I was told, the typewriter was used for years and years by its owner to write correspondence between Portugal and Angola and after that the sellers wife used to do some school reports in the late 70's. For now, I'm in love its round keys and its smooth typing. It needs some maintenance but it works wonderfully. It shows some signs of heavy using but that what I like the most about this amazing machines, to know that they have fulfilled their purpose. 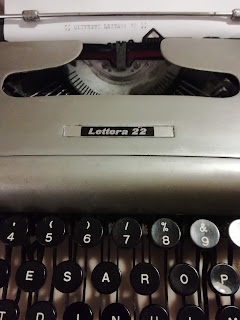